There are no Secrets. Here is the Secret. 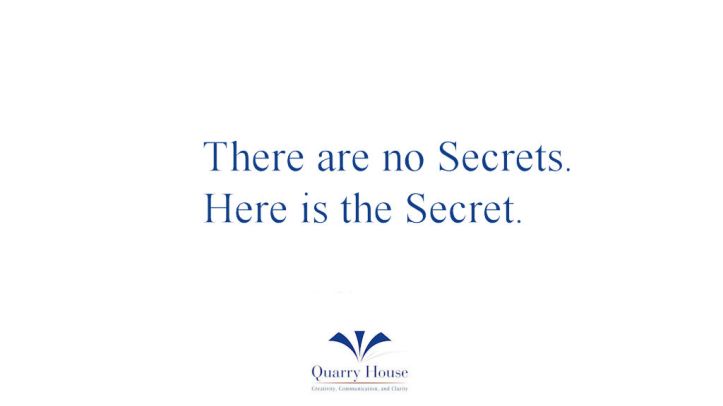 I have things in my life that just work. I don’t really know why. Or I sort of know why, but not in any real detail. And you know what? I’m OK with that. When I hit the switch on my wall, electricity appears. When I turn the key in my car, it starts. My life is full of stuff like that.

I sort of understand these things, but push comes to shove, I don’t really. That’s why when things stop working, after a perfunctory look at them, enough to remind me how much I don’t understand, I end up calling the electrician or my mechanic and just get it fixed.

Why is that important? I’ll explain later.

Few of my professional clients have any idea that besides my work, I am a poet, writer, photographer and artist. For that matter, hardly of the people who know of my artistic work have any idea what else I do for a living.

I got remarried about a year and a half ago. Getting married as adults is a lot different than getting married when you are young. You both have lives and families and stuff that somehow have to merge together. She moved into my house, and we’re still figuring it all out, slowly moving a space that was mine and turning it into something that is ours.

Part of that was my art studio.

I had a small studio in one of my rooms and we turned that room into an office for my wife to work and study in. I tried moving my studio into the utility room, but that didn’t work out well. We were stacking bins and incoming stuff in that room and there wasn’t space to work.

That’s really all you need for a studio. Space and light. And there wasn’t enough of either in the project room, which had become (and still is.) more of a warehouse than a creative space.

I had actually wanted a larger studio for some time. As I have painted more and more, I have also moved from small work to larger and larger canvases and there was s physical limit to the size canvas I could do in my little space. I wanted more room and more light to do bigger work and to have more than one work going at one. I do a lot of layering in my work and being able to work on multiple paintings, letting some dry as I work on others would be a wonderful thing. A new larger studio was on the someday list, even before the wedding, and afterward, it became more important.

I won’t say I worked hard at finding a space. There has been a lot going on the last eighteen months. One son moving to Florida for college. My daughter moving from Vermont to Virginia. And of course, my marriage and all the change a marriage brings.

Not that I had any idea what I would do with it with all those other things going on, and the two of us ping-ponging between two states every week. The last thing I needed was another project.

But I believed it would happen. I told others and I told myself. My wife encouraged me in my delusion. There was no reason to think it would happen. The kind of space I needed, with light, tall ceilings and a bargain basement price, is not exactly common here in my little corner of Vermont.  Still, I acted as if it would.

It did. Almost with perfect timing. Out of the blue, about a month after my wife found a job here in Vermont and we finally moved in together, I had breakfast with Jeff, a good friend of mine. He was looking at buying an old church in the nearby town of Middle Granville, New York, just across the border.

He has big plans for the building, even though there is a lot of work to be done. Among other things (everyone up here seems to have two or three gigs going on.), Jeff repairs and builds musical instruments. Guitars and the like. He plans to make the downstairs fellowship hall into his workshop, reclaiming his basement at home. The sanctuary, he wants to fix up and make a public space for musical shows and inside markets, There was only one space he had not decided what to do with: A room behind the sanctuary.

That room is about five times the size of my in-the-house studio. The ceilings are twelve feet high.  There are these tall windows with a combination of green and yellow stained glass and a few clear panes bringing in this beautiful light. It gets the afternoon sun, which is when I generally paint. It is in the back of the building, so it didn’t get the road noise, but it is on a main road, easy to get to. It was, in other words, perfect.

And he made it more perfect, offering to put in special LED lighting tubes to replace the fluorescent tubed and replicate daylight. and at a price, I could afford.

What I wanted, when I wanted it, at an affordable price. Slam. Dunk. Done.

There’s a lot of work to do. I have been ripping up carpet and the tiles beneath and a fibrous subfloor that comes apart in pint-size pieces. But it is happening. While it is not finished, I moved in this past weekend and began painting in there yesterday.

This has been a pattern in my life. When I believed, and when I acted on that belief, good things happen. I don’t pretend to understand it. Some call it the Law of Attraction and there is a large, large, LARGE movement out there that teaches the idea of a benevolent universe that we can think our way to the things we want. Some who have a Christian leaning like me, often refer to it as “Prosperity Christianity” – the idea that God wants and will make good things happen for us.  There are even people who have tried to use quantum physics to explain what is going on and that it’s a law of the universe that we can believe our way to a perfect life. I’ve read the books and they make my head spin.

The funny thing is that they all come at it from these wildly different directions, but they all say the same thing.

It works. It doesn’t make sense in a world sell secrets and has its own agenda of how things happen.

I don’t pretend to understand it. But there’s something to it.

This is what I know from my own life. When I have believed that things would work out, and then did the work as if it would, it always has.

Let me repeat that. It ALWAYS has. Not sometimes. Not mostly. Always.

There are some catches to it. I have to believe. And I have to work. I have to be consistent.  All three. Most of us are pretty good doing one or two of the three, but not on all three. Sometimes we need help and encouragement. Books. Encouragers. Coaches and counselors.

My first exposure to the idea was with Napoleon Hill and since there I’ve read tons of other books. And I do mean tons of them. I have a corner of my library so full of self-help books that I find it a wonderment that the floor doesn’t collapse.

There is no secret.

Most of us fail on one side or the other.  I know I have. I know some of my clients have. We don’t really believe. OR believe we are worthy, or that we can. We believe that the world doesn’t work that way. Oh there are a thousand reasons not to believe we can get what we want. Maybe tens of thousands. As a life coach and spiritual counselor, I have heard them all.

OR we believe and think that is enough. So we don’t do the work. Or we poke at the work, like poking at a snake under the front porch, tentatively, sporadically.

Did I mention sporadically? Yeah, that doesn’t work either, but we do it. And when the miracle doesn’t happen, we declare the world is stacked against us and stop believing and become a self-fulfilling prophecy in the worst possible way.

But when we do all three things: Believe. Work. Persist. Change happens. What we want comes. Don’t ask me to explain it.

There are explanations of course. Remember, the Law of Attraction folks will tell you that this is just how the universe works. The prosperity Christianity people will tell you it’s God working for people who believe. The Quantum Physics people will dazzle your mind with theories. But there is no secret.

I’ve seen it in my own life. I’ve seen it in my life coaching clients. There’s no secret. There’s only belief, work and persistence. My work as a coach and counselor is helping people put those things to work, finding the good stuff that is already in them and helping them persist.

There is no secret.

When I was a boy, my grandfather tried to teach me to hunt. I never took to it, but I learned one lesson that stuck with me my entire life. “Never shoot at an animal.” He told me. “Aim ahead of it and wait for it to come to you.”

It was remarkably effective. I would aim somewhere in front of the animal running through the woods and just wait. Eventually, it would run into my sights and “Bang!”, the animal came down. It was way easier than trying to follow a moving animal as if fled through the woods or across a distant field.

Just let it come to you.

I never took to hunting. I haven’t hunted since I was about twelve, but that lesson has stuck with me. Let what I want come to me. It’s easier. It works. As long as we have those three things. Belief. Work. Persistence.

There are no secrets.

PS:  For many people, personal coaching has proved a remarkably effective way of working towards what they want. It provides a framework of safety, encouragement, proven processes and accountability that helps people find and work your own path to what they want in life, be it success, creativity or spirituality.  Study after study shows coaching speeds the process and has an extraordinary ROI (return on investment.) Are you interested in finding out if life coaching is for you?  I offer three free sessions (with no catches) to allow you to find out. Interested? Contact me and I’ll explain more.